Data centers may be going underwater

If you have ever spilled a drink on your laptop or phone, you understand that water and computers do not mix well. Researchers at Microsoft, however, are aiming to turn this dangerous relationship into the perfect combination, and it could completely change how we store and access data.

Why data centers need a change

Data centers consume massive amounts of energy, consequently creating a lot of heat. This heat is a central issue to data centers worldwide – it causes malfunctions and shutdowns, increases costs for businesses and makes a negative impact on the environment. 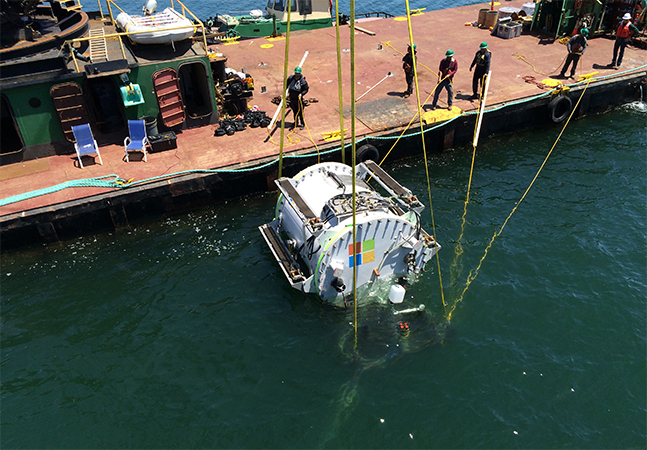 According to a Berkeley Lab report, this massive consumption of energy is growing, too. From 2005 to 2010, energy consumption in data centers increased by 24 percent. Many facilities have since made efforts to upgrade their systems and consolidate servers, reducing the growth to only 4 percent between 2010 and 2014, but data center intake still accounted for about 1.8 percent of all the electricity in the United States in 2014.

Phil Koblence, contributor for Data Center Knowledge, reported that 40 percent of all energy used by data centers is dedicated to cooling and that for every 1°F in temperature rise, the gain is 2 percent in cost savings for cooling. By creating an effective cooling system, operating costs would decrease, the performance of the servers would improve and it would aid the environment.

The ocean could be the solution

Microsoft, which oversees 200 data centers around the world, has begun to research a solution to this issue in San Luis Obispo, California, naming their efforts Project Natick. Its premise is simple: The ocean is the ideal natural cooling system. The execution of this idea, though, is complex. For its prototype, the Microsoft researchers had to bathe the servers in pressurized nitrogen, implement 100 different sensors to test the conditions inside the server's 38,000-pound container, and then carefully place the whole capsule a kilometer out at sea, according to The New York Times.

The researchers' efforts were met with high reward, however, and the system actually performed better than they had initially hoped. Its environmental impact was also limited, with an "extremely" small amount of heat produced. In fact, it was barely a presence in the ecosystem – the shrimp surrounding the capsule were louder than the fans on the inside. Designs for a system three times as large are being put together now at Microsoft, with plans to conduct another trial in 2017

Although lots of designing, planning and creating needs to be done, large underwater data centers could solve more than just operating issues. With enhanced cooling, servers will crash less, but they will also bring data faster to users. Data centers are often currently located in Iowa, Illinois and Texas, where there is lots of open space. This limits the speed of data on the coasts, which according to Project Natick's website, is where "nearly 50% of society resides." By bringing "containerized data centers offshore near major population centers," the success of a "highly interactive future" is possible.

The underwater data centers will also cause other exciting innovations. Server design, for example, may be subject to significant changes. According to same article from The New York Times, the capsules are intended to be underwater for five years, but it would be difficult for most servers to survive without some form of maintenance, so engineers will have to create longer lasting servers to survive the submersion. That being said, the ideal life span would be 20 years. Additionally, without any human interaction, these machines may be built completely different, without the parts to help engineers.

Another exciting possibility is the reduction of energy use. The 2015 trial was powered by land-based electricity lines, but Project Natick's website claims, "we envision that future subsea data centers will be powered by renewable marine energy sources such as offshore wind, wave, tide, or current." If the capsules can function with renewable energy, data center's main issues would be solved. There would be cooled systems with low operating costs and minimal environmental impact.

The government in a submerged future

Technological and fiscal challenges will hinder large scale deployment for the time being, but government agencies will likely find underwater data centers to be an alluring option. Primarily, they will save the government significant amounts of money. If agencies don't have to constantly cool and monitor their machines, operating costs for the government would decrease. The smaller negative impact on the environment would also mean that less effort and funding is needed to regulate the data center industry. The improved speeds of data sharing will likely be attractive to agencies as well. With great volumes of data coming in and out of agencies, more efficiency will lead to a more effective government.

Even if data centers are never implemented, this is nonetheless an exciting development in the data center industry that will likely stimulate more energy-efficient innovations. It signifies that there is a focus to make the changes needed in the industry and that there is much to look forward to in its future.