A few weeks back, I wrote a blog on software defined networking (SDN) and how it is gaining momentum in the market place. To help you recollect, SDN is a new approach to designing, building and operating networks. The control plane is decoupled from the data plane and is logically centralized in an SDN controller to provide a single abstracted view of the underlying network topology and its state. SDN is a kind of technology that takes the high-end features built into routers and switches and puts them into software that can run on cheaper hardware. 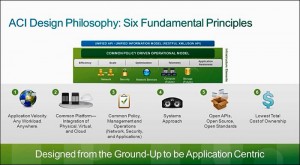 The new breakthrough ACI product is a massive fabric controller that can orchestrate the entire data center, including networks, Layer 4-7 services, storage and compute. The technology helps orchestrate and integrate networks, security and network services that need to be delivered to applications. ACI leverages open APIs along with a mix of both custom Cisco and merchant silicon and ASICs.

The ACI product portfolio has several advantages over existing data center products. ACI is based on Cisco’s more efficient and enhanced Nexus OS (NX-OS) with a reboot time of only 20 seconds instead of the normal 5 minutes. It offers high capacity 40G ports that are only 30% higher priced than the 10G ports, 20% higher port density and  1.92Tbps per slot (100G Ready). It offers 15% greater power and cooling efficiency with true front to back cooling as well as VXLAN Bridging and application policy infrastructure controller (APIC) that integrates well with Cisco UCS/Nexus 7K/9K as well as F5 and Citrix product sets and any kind of hypervisor. The technology uses a common policy operational model that is exposed via a unified API and supports standard interfaces like JavaScript Object Notation and XML. ACI supports any application, hypervisor and physical edge with the visibility of hardware and no per-VM tax. ACI portfolio offers both hardware and software, and the hardware is ASIC-based that supports both merchant and custom silicon. The solution offers 40Gig optical transceivers (BiDi Optics) that would let Cisco customers use their existing 10Gig cables. Cisco Nexus 9000 helps converge UCS servers and storage with application aware switching and ACI control/management/orchestration. Application connectivity requirement policies and data models in ACI are not tied to a physical device, but are logical; they can be dynamically provisioned and directly mapped to the infrastructure. Servers and top-of-rack switches can be changed without requiring associated re-definition of those models using service profiles. 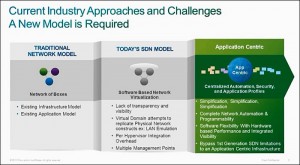 With this new product, Cisco’s goal is to take a systems-based approach rather than a box-by-box approach and provide the flexibility of software with the security and performance of hardware and simplified management. This breakthrough product is a step beyond the traditional SDN. ACI makes the networks more programmable, automated and equipped to handle the new wave of business applications that are emerging from trends like big data and the Internet of Things.

Traditional SDNs are software-only overlays that result in loss of visibility between the application service and the network, lack of scalability, depend on specific hypervisors and focus on a “small subset” of programmability applicable only to “one-eighth” of the data center. With ACI, Cisco is raising the bar in the data center network by bringing the Unified Fabric and setting the new standard for any networking vendors who claim that they are providing data center switching fabric. ACI blends software with merchant silicon and custom ASICs in physical hardware that’s optimized for availability of service (physical or virtual). ACI provides an automated common operational model through a “unified” northbound/southbound RESTful API based on XML/JSON languages. This is what I call a “gamechanging” technology that simplifies the data center and network management and allows the network to be application aware and adapt accordingly. The same changes that server virtualization wrought on the hardware world years ago are now happening in networking. The launch of Cisco ACI ushers a new era of simplicity and automation for data centers worldwide. I am really excited about this new technology and the benefits it brings to our data center customers. Please share your comments and thoughts with me. Follow me on Twitter @Unicom_Architect.